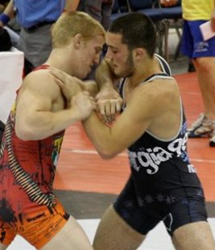 Blackstock is a 2010 graduate from Alexander and he is a 3x State Champion.  In 2008, as a sophomore, he won his first State Title while competing at 171 lbs.  He would then go on to win his final two titles while wrestling at 189 lbs.

In 2009, Blackstock was able to place 5th at 171 lbs at the Super 32, prior to that he had a phenomenal 2 year run in Cadets at Fargo.  In 2007 Blackstock would double All-American in Fargo, placing 8th in Cadet Freestyle and 5th in Cadet Greco.  He would repeat the double AA in 2008, improving in both styles, as he finished 3rd in Greco and 2nd in Freestyle.  USAWrestling Magazine had Blackstock ranked #22 at 189 lbs after his senior season.

Waddell is a 3x State Champion that graduated in 2017 from Gilmer Co High School.  As a freshman, Waddell took 3rd at 160 lbs, and then won his first State Title as a sophomore at 170 lbs.  His second and third State Championships came at 182 lbs.  His senior season he won a thrilling 3-2 OT victory over Caleb Little of Jefferson, denying Little his 4th State Title.

USAWrestling magazine had him ranked as the #6 Senior at 182 and The Open Mat had him ranked 20th in nation at 182.  FloWrestling had him ranked 10th in the country at 182 lbs, and he would eventually sign to wrestle with Oklahoma.  As a Freshman he wrestled in the Big 12 Conference tournament for the University of Oklahoma, and then he took a red shirt in his 2nd year, while transferring to Chattanooga.  This past season he was a fixture in the top 20, he placed 4th at the Southern Scuffle, and he qualified for the NCAA National Championships.

Flo Video Links: (May need Flo subscription to view)
Conso Semis vs Montalvo of Oklahoma St.
Super 32 Round of 16 over Smeltzer

Mitchell graduated from Collins Hill High School in 2010 as a 3x State Champion.  He won his first title as a freshman wrestling 103 for Georgia legend Jeff Bedard at Wesleyan.  He then transferred to Collins Hill and placed 3rd as a sophomore at 112 lbs.  He would then win State Titles at 119 as a junior and 125 as a senior.

Mitchell is 1 of only a handful of Georgia wrestlers to ever place twice at the Super32 tournament in Greensboro.  He placed 8th at 112 as a sophomore, and 5th at 125 as a Senior.  Mitchell also earned All-American honors while competing at the NHSCA Nationals in Virgina Beach.  In 2009 he took 4th at NHSCA Junior Nationals, and in 2010 he won the NHSCA Senior National Championship at 125 lbs.

Coming out of high school, Mitchell was ranked 22nd at 125 lbs by USAWrestling Magazine and he would sign with Virginia Tech.  Mitchell would eventually move closer to home when he transferred to Chattanooga.