The Top 30 Georgia wrestlers from the last decade #1-3

Russell is a 2014 graduate from Collins Hill High School and a 4x State Champion.  As a freshman, Russell would win it a 103, knocking off future teammate Ryan Millhof in the finals.  As a sophomore he won it at 106 and then moved up to 113 and 120 for his junior and senior seasons.

Russell is 1 of 3 Georgia wrestlers to place at the Super 32 three times.  In 2011 he would finish 5th at 106 lbs, beating Nick Lee in the round of 16 before losing to Luke Pletcher in the quarters.  He would fall to Millhof in the consolation semis, but would bounce back with a great win over Coy Ozias to finish 5th.  In 2012 he would advance to the finals at 113 by knocking off Nick Piccininni in the quarters and Brent Fleetwood in the semis.  He would finish 2nd to Millhoff, dropping a 1-0 decision.  In 2013 he would finish 3rd at 120, once again defeating Nick Piccininni, this time in the consolation finals.  Russell also finished 1st at the NHSCA Junior Nationals in 2013.  He would defeat Brent Fleetwood in the finals by a score of 8-3.  He was a Fargo finalist in 2014, finishing 2nd in Junior Freestyle at 120 lbs.  On his way to the finals he would defeat Ryan Deakin 12-0 in the quarters.   Russell wrestled for Team Georgia in the 2014 Dream Team Classic, picking up a 5-2 win over Scott Parker.

He was ranked 3rd in the country at 120 lbs by AWN, 39th over all recruit by D1 College Wrestling, and the #2 senior at 120 lbs by USA Wrestling Magazine.  He would sign with Edinboro, and compete for the Fighting Scots for his first 4 seasons (Including red shirt), before transferring to the University of Minnesota for his final year.  For Edinboro, Russell would qualify for the NCAA Championships 3 times and finished 7th in country in 2017 to earn Division 1 All-American honors.  In 2019, while wrestling for Minnesota, Russell would advance to the blood round of NCAAs, just missing becoming a 2x All-American.  He would finish his college career with 140 wins. 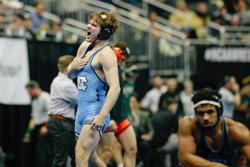 He was ranked #2 in the country at 195 by AWN and the #2 Senior at 195 by USA Wrestling.  D1 College Wrestling had him as the #30 recruit in the Class of 2014  and Flowrestling had him ranked #3 at 195 lbs.  Ness would sign with the University of North Carolina where he collected 88 career wins as a 4 year starter.  Ness would qualify for the NCAA Championships 3 times and he went on to become a 2x NCAA Division 1 All-American.  in 2018 he would upset the #10 seed and the #7 seed in the first 2 rounds, and then upset the #9 seed to place 7th at 184 lbs.  In 2019 he upset the #2 seeded Shakur Rasheed of Penn State in the 2nd round, and then knocked off 10th seeded Sammy Colbray of Iowa State  to advance to the semifinals, he would eventually place 6th at 184 lbs.

Millhof is a 3x NHSCA National Champion, winning titles in 2012, 2013, and 2014.  At Sophomore Nationals in 2012, Millhof would defeat Bryce Meredith 6-4 in the finals at 113 lbs.  Millhof would win Junior Nationals at 120 lbs, and he would win Senior Nationals at 126 lbs witha 2-1 OT win over Locsin of California.  Millhof also placed 3 times at the Super 32 tournament, and is the only wrestler from Georgia to win the event twice.  in 2011 he would fall to Matthew Kolodzik, 7-5 in the semifinals and finish 3rd by defeating Luke Pletcher 6-0 in the consolation finals at 106 lbs.  In 2012 he would defeat teammate Sean Russell in the finals at 113 lbs to win the tournament (on a side note, Zahid Valencia finished 3rd at 113).  In 2013, Millhof would defeat Zeke Moisey in the semis and Dom Forys in the finals to win the title at 126lbs.   Millhof would also defeat Moisey representing Team Georgia in the Dream Team Classic.

Millhof would be ranked 5th in the country at 126 lbs by AWN and he was the #4 Senior at 126 according to USAWrestling Magazine.  D1 College Wrestling had him ranked as the #25 overall recruit in the class of 2014.  Millhof would sign to wrestle at Oklahoma and he was their starter at 125 his first two years in college.  Millhof would qualify for the NCAA National Championships as a sophomore in 2016.  He entered the tournament as the 5 seed and defeated Darian Cruz of Lehigh 4-2 in sudden victory.  Millhof would then defeat Schram of Stanford to finish 7th and become a Division 1 All-American.  In 2017 Millhof took a red shirt and transferred to Arizona State for his final 2 season of eligibility.  He would qualify for the NCAA tournament in 2018 and 2019, but had to withdraw in 2019 due to an injury.  He would finish his up with 73 career wins.