This week belongs to 5A, quite possibly the toughest classification in all of Georgia.  With that being said, we will only be releasing 4A-7A at this time, because we don't know how things will shake out for the 1A-3A Classifications at this time.  There are still several things to be determined about the landscape of Georgia HS wrestling for the 20-21 season in regards to the number of classifications for Traditional and Duals.

A 5 team Region that boasts 3 teams that qualified, and made runs at the State Duals in 2020.  Coffee Co drops down from 6A, but the other 4 teams were all in 5A last season, albeit in 2 different Regions.  Veterans made it to the finals of the State Duals, where they fell to Woodland, while Ware Co lost in the consolation semis, and Coffee was knocked out in the consolation quarters.  All 3 of those teams did well in the Traditional State tournament, with Veterans and Coffee Co posting top 5 finishes.   This Region returns 16 State qualifiers, 4 of which were State Placers in 2020.

Ware Co returns the most State qualifiers in the Region with 6, led by 3rd place finisher at 113 Anthony Phillips.  The Gators' returning qualifiers are spread throughout their lineup, giving them great flexibility to handle growth and weight changes heading into the 2021 season.  Banner Thomas (152) and JJ Rodriguez (170) will both look to improve upon their round of 12 finish at State last season.

Coffee Co and Veterans were both hit hard by graduation, and both return 4 State qualifiers.  Veterans will rely heavily on their 1-2 punch in the light weights with 106 lbs 6th place finisher, Damien Johnson, and 113 lbs 5th place finisher, Tyler Barb, both returning.  2019 6th place finisher Tanner Vorse will also return to the lineup after coming up 1 match short of the podium in 2020.  Coffee Co will return 5th place finisher Jesus Riano, who should return to a loaded heavyweight class.  He too will be aided by the return of a 2019 State placer that came up 1 match short, Nolan Smith made the blood round at 145 after finishing 5th at 126 the year before.

7 team Region that sees Northgate drop down from 6A and Northside, Columbus come up from 4A.  Harris Co competed in Region 1 last year and the other 4 teams were together in Region 3.  Three teams qualified for the State Duals in 2020, with Harris Co making a run to the consolation semis.  Whitewater and Starrs Mill were the 2 representatives from their Region.  Harris Co also finished 5th at Traditional State, Starrs Mill was the only other team in the Region to finish in the top 15.  There are 8 returning State Placers and 25 returning State qualifiers in the Region.

Harris Co is loaded, they return a whopping 10 State qualifiers, with 6 of them returning State Placers, all finishing in the top 4.  The Tigers should be led by returning State Champion, Oran Decke, who finished 1st at 113.  Davin Lundquist (106), Garrett Wood (138) and Grant Wood (145) each finished 3rd last season, while Tucker Kinsaul (132) and David Emfinger (182) both finished 4th.  Returning State qualifiers at 160 and 170 should make this Tigers lineup quite a force in the State.

Starrs Mill and Northside each return 3 State qualifiers, and both of them have a returning State Placer.  Starrs Mill brings back returnong State Finalist, Ethan Kasler who finished 2nd at 152.  Northside returns 3rd place finisher at 145, Sam Bowers.

McIntosh is a young and talented team that has some nice pieces that could fins their way on the podium in Macon this season.  Griffin returns 1 State qualifier, Brassley Terrell, who finished 8th at Sectionals at 160 lbs last year.

The Defending 4A State Champs have moved up a classification and will be housed in this 8 team Region.  Jonesboro and Banneker are the only teams that were in 5A last season, as the other 5 schools are dropping from 6A.  Woodward is the only team that had any success last season, as they won both the State Duals and Traditional State tournaments.  The other 7 schools combined for a total of 6 points at Traditional State.

Woodward returns 6 State qualifiers, including returning Champions Michael Kilic at 138 and Matthew Singleton at 160.  They will also have 106 lbs 3rd place finisher Colby McBride returning to the line up to help solidify the light weights.  Those are the only 3 returning State Placers in the entire Region.

Jonesboro returns 9 Sectional qualifiers, with 3 of them being returning State qualifiers.  Jahim Young (170) and Sean Brownlee (182) qualified for State last year with Young falling 1 match short of placing.  Nosa Egbon also qualified at 106, and advanced to the round of 12.

Banneker, Forest Park and Mundy's Mill, eachreturn State qualifiers from last season.  Forest Park has Clifton Redding, who finished 6th at Sectionals and won a match at 126 lbs at State.  Mundy's Mill returns 2 State qualifiers, Christian Brown at 160 and Sherman Franklin at 170.   Returning for Banneker are 2 qualifiers at the top of their lineup, Robert Thomas at 220 and Terrion Jones at 285.

There are no returning State qualifiers for Creekside, Drew or Tri Cities.  Creekside does return 3 Sectional qualifiers and Drew returns 1 wrestler that qualified for Sectionals. 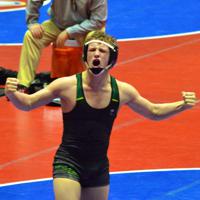 This is an 8 team Region, where all of the teams were in 5A last season, and all of them were in Region 4 together.  Ola and Union Grove qualified for State Duals last season, with Ola finishing 4th.  Ola also finished 4th at Traditionals State, and no other team in the Region finished inside of the top 10.  Their are 20 returning State qualifiers, with 9 of them being State Placers.

Ola returns most of their lineup from last season's 4th place team.  They return State Qualifiers from 106-138, with 4 of them being State Placers, including State Champion Reese Jones at 106.  Gavin Hayes finished 2nd at 113 last season, along with Sam Harris who took 2nd at 138.

Union Grove returns 7 State qualifiers from last year, led by State Runner-up Alexander Troy at 170.  Also returning for the Wolverines will be 6th place finishers, Dalton Clinton (113) and Devin Fairley (145).  Garren Groover (120) and Levi Roe (182) both look to improve upon round of 12 finishes at State last year.

Of the remaining 4 teams, only Stockbridge returns a State qualifier, heavyweight Tyrone Lewis, who made it to the blood round before being eliminated.

Best Wrestler: Jones, Ola-106 (I'll let you can decide which of the two is the best, LOL)