We are back, and this week belongs to 6A, remember, we will only be releasing 4A-7A at this time, because we don't know how things will shake out for the 1A-3A Classifications.  There are still several things to be determined about the landscape of Georgia HS wrestling for the 20-21 season in regards to the number of classifications for Traditional and Duals.

This is a loaded 8 team Region, with 4 schools moving up from the always tough Region 7-5A.  Carrollton, E. Paulding, Paulding Co, and Rome are moving in with the always tough Alexander and S. Paulding to make this a super tough Region.  Alexander, South Paulding and Carrollton all qualified for the State Duals last season, and finished top 10 at the Traditional State Tournament, while Dalton was 11th.  There are 9 returning State Placers in the Region, and while that number isn't overwhelming, 4 of them were State Champs and 2 others made the finals.  There are a total of 24 returning State qualifiers in the Region.

Alexander and South Paulding finished 1 and 2 last season, and look to be the favorites again the season.  Alexander returns a whopping 9 State qualifiers led by a pair of State Runner-ups.  Andrew Voiles finished 2nd at 113 and Dawson Matthews finished 2nd at 152, they will be joined by Jesse Martin, who finished 6th at 285.  South Paulding returns 6 State qualifiers from last season including the 120 lbs State Champion, Jacob Seymour.  If the Spartans hope to knock off Alexander this season they will need big jumps from their other qualifiers.

Dalton and Carrollton each return 3 State qualifiers from last season.  Dalton brings back a pair of State Champions in Cole Hunt (106) and Hunter Noland (138), but they will need some help in the top half of their lineup if they want to break into the Region Duals finals.  Carrollton also will bring back a pair of State Placers, led by Brock Bibbee, who finished 3rd at 220.  ShyQuan Johnson finished 4th at 160 and Nate Butler qualified at 132 for the Trojans.

East Paulding, Paulding Co, and Rome will each bring with them 1 returning State qualifier as they move up from 5A.  Rome's returning qualifier is defending State Champion at 195, Bryant Wilkinson.  East Paulding returns Josh Denson, who was 1 match away from placing at 120 and Paulding Co brings back Ethan Bennett who qualified at 138.  Douglas Co does not return any State qualifiers, but does bring back a pair of Sectional qualifiers. 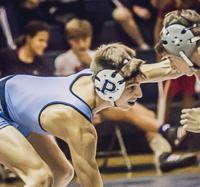 A 9 team Cobb County Region that sees Kennesaw Mtn, Lassiter and Wheeler come down from 7A and Kell move up from 5A, this enables Pope to move over from the Fulton Co Region.  Pope and Lassiter both qualified for the State Duals last year, with Pope winning the 6A State Title.  Pope also finished 4th at the Traditional State Tournament and they were the only team in the Region that finished in the Top 15.  This Region returns 21 State qualifiers with 6 of them being placers.

Pope did lose a ton to graduation, but they should bring back enough to hold off Lassiter in this Region.  The Greyhounds return 5 State qualifiers with 3 of them being returning State Placers.  Joey Robinson won a State Title at 113 last season and Aidan Karpinski finished 2nd at 106.  They will be joined by 6th place finisher at 220 TJ Mordarski plus they will be able to find a spot in the lineup for Jacob Robinson, who was a State Qualifier at 113 in 2019.

Lassiter returns 7 State qualifiers led by 3rd place finisher David Panone.  Frankie Valle finished 6th at 285, but probably the biggest news is the hopeful return of 2019 State Champ Robert Weston.  With those three anchoring the lineup Lassiter may have a shot, if Pope cant replace the middle of their lineup.

Allatoona returns 7 Sectional Qualifiers, with 3 of them being State qualifiers, of those 3, only  Kolton Formato picked up a win at the State Tournament.  Kell, South Cobb, and Sprayberry each bring back a pair of State Qualifiers.  Sprayberry's finished 4th at 106 and Kyle Sanders was 1 match away from placing at 160 for the Yellow Jackets.  There are no returning State qualifiers for Kennesaw Mountain, Osborne, and Wheeler.

This is a 8 team Region that mashes together pieces of Region 6 and Region 7 from last year, along with the addition of Riverwood from 5A.  4 of these teams advanced to the State Duals in 2020, with Cambridge taking 4th and Creekview finishing 3rd.  Creekview and Cambridge also finished 1st and 2nd at the State Traditional tournament.  There are 29 returning State qualifiers and 14 returning State Placers in this Region.

Cambridge and Creekview will be battling with each other for control of this Region all season long.  Cambridge returns an astonishing 7 State Placers, including 3 that finished as State Runner-up.  Kyle Romano (138), Evan Kurtz (170), and Connor McHugh (220) each took 2nd at State and Brendon Boyd finished 4th at 160.  Add in Cullen Kane (106) and Nick Barton (145) who each took 5th plus 6th place finisher at 120 Ben Werth, and you have one of the most talented teams in the entire State, in any classification.  Creekview isn't going to concede the region however, as they bring back a pair of State Champs, Andrew Cory (126) and Parker Bennett (285).  The Grizzlies will also bring back 3rd place finisher at 145, Cade Sousa and 4th place finisher at 132 Walker Wilkie.

Sequoyah returns more Sectional qualifiers than anyone else in the Region with 10, and 7 of those went on to qualify for State.  Of those 7 returning State qualifiers, 2 of them are returning State Placers, Carson Throne finished 3rd at 120 and Tomus Satterfield finished 6th at 145.  Sequoyah is loaded at teh top of their lineup, and will give anyone in the State fits, and they are the clear cut number 3 team in this Region.

Riverwood, River Ridge, and Chattahoochee each return a few State qualifiers, and should be battling it out with one another for that 4th spot in the Region Duals.  Chattahoochee returns 3rd place finisher at 195 lbs, Nate Bukovich.  Johns Creek and Centennial will only return 1 Sectional Qualifier each, and no State Qualifiers.

7 team Region that sees Central Gwinnett and Shiloh drop down from 7A and perennial powerhouse, Buford, move up from 5A.  Buford and Lanier both qualified for the State Duals last season, and Buford finished 3rd, the Wolves were also able to take 2nd at the Traditional State Tournament.  There are 20 returning State qualifiers in this Region with 4 of them being  State Placers.

This is Buford's Region and with all 4 of the Region's returning State Placers in its lineup, they should cruise to the Region title.  With that being said, Buford did lose a ton to graduation and Tyler Henley is the top returner for the Wolves after finishing 3rd at 126.

Habersham Central and Lanier both return 3 State qualifiers, and look to be the ones to battle it out for 2nd in the Region.  Habersham will bring back Fischer Bejnerowicz who was 1 match away from placing at 113 pounds.  Lanier will be led by Justus Lawrence, who finished 4th at Sectionals last year at 120.