It's time for Class 7A, remember, we will only be releasing 4A-7A at this time, because we don't know how things will shake out for the 1A-3A Classifications.  There are still several things to be determined about the landscape of Georgia HS wrestling for the 20-21 season in regards to the number of classifications for Traditional and Duals.

We have all heard the phrase, "we don't rebuild, we reload" and Camden Co lives this cliche to its fullest.  The Wildcats have been counted out many times before, and once again they are facing staggering losses due to graduation.  Will this be the year that someone finally catches up to them, or will they once again reload?  Camden only returns 5 State qualifiers from this past season, but 4 of them are State Placers, however, none of them were State Finalists.  They will be led by 3rd place finishers Riley Dahlgren (106), and Garret Gaston (220), along with 4th place finisherat 132 Kaleb Clark.

Colquitt Co brings back 11 starters from last years squad, and 8 of them are returning State qualifiers.   Jeremy Paradice was your State Runner-up at 138lbs and crowd favorite in Macon, James Bledsoe finished 5th at 220.  If Camden should struggle to "reload" this year, Colquitt could be the team to take them out in the Duals.

If Colquitt has the best shot in the Region at overcoming Camden in Duals, Lowndes may have the best chance at overcoming them in the Traditional tournament.  Lowndes returns a pair of State finalists in Dominic DiTomasso (106) and Tyson McCullough (113), plus a couple of other superb lightweights that couldnt find their way into the lineup.

Tift Co returns 3 State qualifiers with Timothy Wright at 138 and Garrett Sumner at 285 falling 1 match short of reaching the podium. 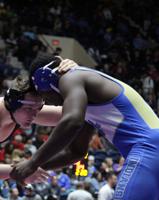 McEachern moves into this Region, coming over from Region 3, but all of the teams in this Region were in 7A last year.  3 teams qualified for the State Duals in 2020, McEachern had the most success, advancing to the consolation quarters, while Newnan and East Coweta also qualified.  There are 13 returning State Qualifiers from this Region, but only 1 of them is a returning State Placer.

Newnan returns 6 State Qualifiers, but only Connor Marsh at 106 and Quinn Inman at 220 won matches at the State Tournament.  The Cougars also return 6 others that qualified for sectionals, giving them 12 returning starters that advanced to the post season.

McEachern and East Coweta will each return 3 State Qualifiers.  McEachern will be led by 4th place finisher at 220 Ese Dubre and Shamaad Price, who finished 1 match away from placing at 113.  East Coweta brings back Christian Gordon (113) and Jaxon Garner (145), with both of them going 1-2 at the State Tournament.

6 team Region that sees Harrison move up from CLass 6A to join with 4 teams from Region 3 7A and Walton, who moves over from Region 4.  Only North Paulding qualified for the State Duals last year and they went 0-2, and Harrison is the only team to finish inside the Top 15 at Traditional State.  There are 12 returning State Qualifiers from this Region, but only 2 of them are returning State Placers.

Walton and Harrison return the most State qualifiers in this Region with the Raiders bringing back 4 and the Hoyas returning 3.  Walton does not have any returning State Placers, but Caden Canzano finished 6th in 2019.  Harrison returns 3rd place finisher at 132, Jarrod Pominville along with Wyatt Sligh, who was 1 match from placing at 106.  Hillgrove returns 2 State qualifiers including 2019 State Champion Connor Powell, who finished 3rd in 2020 at 120 lbs,  Those three teams should battle it out for the top spot in the region this season.

A 5 team Region that combines parts of the old Region 7 and 8 from class 7A last season.  Brookwood and Parkview qualified for the State Duals last season, and Brookwood was able to advance to the consolation semifinals.  Brookwood also finished tied for 3rd at the Traditional State Tournament.  There are only 9 returning State qualifiers in this Region, but 3 of them are returning State Placers.

Brookwood leads the way with 5 returning State qualifiers including 2 State Placers.  Xavier Bentley finished 3rd at 113 and Landon Moss finished 6th at 182.  Despite graduating 3 State placers, the Broncos do return over half of their starters from last season.

Newton returns 6 Sectional qualifiers, including State qualifier Landyn Camp who was an alternate at 113 and got into the State Tournament.  Newton may not be able to battle their way up to the number 2 spot in the Region, but they could make a push for 3rd or 4th.