With the GHSA conducting their spring meetings in late June, we are now somewhat certain about what the postseason will look like.

This week we will preview at the 2A/3A Duals Classification and we will start things off with Area 1-4.

8 Team Region, with 5 of the schools competing in 3A last season, and 3 schools dropping down from 4A.  Pike Co advanced to the State Duals last season and went 2-2 while advancing to the consolation quarterfinals.  Pike Co also finished 6th at the Traditional State Tournament in 2019.  Central, Macon is the only other school to score points at the Traditional tournament last season.  There are 8 returning State Qualifiers in the Area, with Central, Macon and Pike Co each returning 1 State Placer.

Pike County returns 5 State Qualifiers from last season, but only 6 sectional qualifiers, they will need to fill in some depth at the other 8 weights in order to hold off Central, Macon and Jackson, both of which return over half of their line up.  Pike is strong in the middle weights with sophomore Luke Woerner finishing 1 match away from placing at 138 and Senior John Lovett finishing 2nd in the State at 160.

Upson Lee and Mary Persons will be dropping down to 3A after competing at 4A the last 2 season.  While neither team will be returning any State qualifiers, both teams have a good core of Sectional Qualifiers coming back to give them a great shot a t top 4 finish in the Area Duals.

Crisp Co will return 5 Sectional qualifiers from last season, but they will need to solidify a full lineup before they will have a chance to crack into the top 4 and qualify for the State Tournament.  Cook Co returns 3 Sectional qualifiers, and Americus-Sumter returns 1 Sectional Qualifier.  None of these 3 teams return any State Qualifiers.

7 team Area that will see schools come together from 3 different classifications.  Burke Co, Cross Creek, and Richmond Academy were in 4A last season, and Morgan Co competed in 3A last year, while the rest of the Area competed in 2A.   Burke Co was the only team in this Area to qualify for the 2020 State Duals, however only Harlem and Morgan Co were able to score any points at the Traditional State Tournament in Macon.  There are 9 returning State Qualifiers in the region, but only 1 returning State Placer.

The other 6 teams teams in the Area will all have a legitimate shot at placing top 4 and qualifying for the State Duals.  While Harlem may not necessarily be a shoe-in to win the Area Duals title, they should be one of the top 4 teams.  Ultimately, it will come down to which 4 teams can produce a full lineup.

Hephzibah returns 6 Sectional qualifiers and will be led by their only returning State qualifier, Isaiah Grant.  Burke Co, Cross Creek, and Richmond Academy will each return 5 Sectional qualifiers.  Cross Creek will be led by Constantin Nimo, who qualified for State at 113 last season, and Richmond Academy will be returning 182 pound State Qualifier, Rhys Deloach.

Morgan Co and Westside will each be returning 4 Sectional Qualifiers from last season.

A huge 9 team Area where all of the teams competed in 3A last season.  Pierce Co and Brantley Co, both qualified for the State Duals last season, and both teams went 0-2.  Pierce saw the most success at the Traditional tournament, finishing in 7th place.  There are only 4 returning State qualifiers in this Area and none of them are returning placers.

History says Pierce and Brantley Co will once again be battling out for the top 2 spots in the Area Duals.  Both teams return 2 State Qualifiers and both teams return 6 Sectional qualifiers.  The winner of that Dual, could very well be the team that wins the matchups between returning qualifiers.

Appling Co returns 8 Sectional qualifiers but no returning State qualifiers.  However, with so many returning starters, they should be in a good position to grab a hold of one of the State Playoff births.

Savannah Arts, Groves, and Windsor Forest each return a handful of Sectional qualifiers and should be in position to battle it out for the last spot in the State Playoffs.

Beach, Johnson-Savannah, and Savannah each return 2 or fewer sectional qualifiers and will find it difficult to put together enough of a lineup to contend for one of the top 4 spots in the Area Duals. 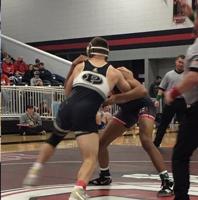 Sonoraville is the top team in this Area and should cruise to the Duals Championship.  They return 5 State Placers and 7 State qualifiers.  They will be led by a pair of State Champions, Senior Eli Knight won it at 126 lbs and Junior Jebb Knight won it at 170 pounds.

Bremen, Rockmart, and Adairsville should be battling it out for the opportunity to face Sonoraville in the finals of the Area Duals.  Bremen returns 10 Sectional Qualifiers, with 6 of those also qualifying for the State Tournament.  Bremen will be led by 106 pound State Champion, Braden Sauls.  Rockmart is returning 6 State qualifiers with 3 of them being returning State Placers.  They will be led by 170 pound 3rd place finisher, Dalvin Millhollan.  Adairsville has the most work to do in order to make the Area Duals finals, as they return 4 State qualifiers.  They will be led by 160 pound State Runner-up, Dalton Cornett.

Sandy Creek and Gordon Central do not return any Sectional Qualifiers for this season.